I just acquired these 2 titles for PS3, in order to get a sense of what is known as one of the best and most accessible Air Combat simulation (Although IL-2 Sturmovik – Birds of Prey is certainly superior in regard to the realism of the piloting experience).

Blazing Angels – Squadrons of WWII is a flight combat video game for the PC, Xbox, Xbox 360, PlayStation 3. It was developed by Ubisoft Romania during the second fiscal quarter of 2006, so it’s no what you can call cutting edge. The game features 46 different World War II fighter planes and allows the player or players to take part in several WWII events (20 missions) as a fictional squadron. Online support allows 16 players to take part in head-to-head and co-operative battles.

A sequel of Blazing Angels: Squadrons of WWII, Blazing Angels 2 – Secret Missions of WWII is a 2007 flight-combat video game for the PC, PlayStation 3, and Xbox 360; developed again by Ubisoft Romania. The game puts the player in an elite Allied squadron trying to prevent Nazi Germany from creating a weapon of mass destruction. As the player progresses, he or she will travel around the world and battle the enemy with a list of prototype fighter aircraft and upgrades. Multiplayer mode includes deathmatch, cooperative, capture-the-flag, and epic battle. 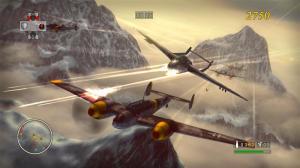