The Western Desert Campaign is the first one available in Battle Academy for iPad. One will argue that this game is not the most realistic simulation one can find about WWII at tactical level, and that’s fair enough. But what an awesome lot of fun to move troops across the dunes and villages on a tablet!

Mission #1 is titled “Capture the fort”, and it is some sort of tutorial set up involving just 3 AFVs and a couple of squads, whose mission is to take control of an isolated Italian fort. I love these briefing screens:

The interest here will be to tick the 3 proposed achievements:

So let’s get started! No option to configure your army here, you’re just offered the default 3 “Queens of the desert” aka Matilda tanks. A couple of Bren carriers full of tommies will come along a bit later, to help securing the buildings.

I launch my platoon of reco tanks at full speed along the trail, and on turn two they spot their first column of italian tankette, which turn out to be CV33 or L3. The Matildas easily deflect the rounds of machine-guns, and in a snap I have blasted the first two in the column down to hamburgers. The 3rd one will face the same doom minutes after, hammered by my off-board artillery. 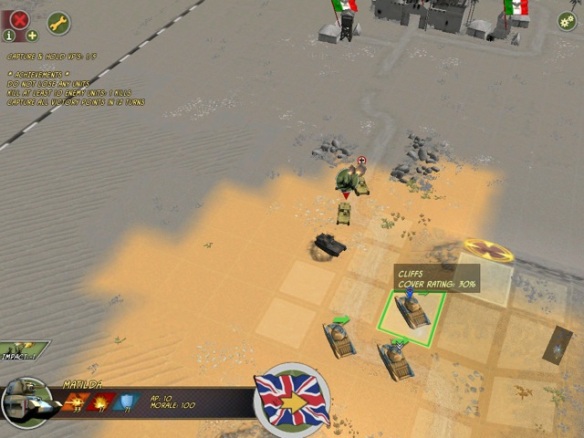 Pushing forward, I encounter some opposition in the rugged terrain around the road, where italian footmen have taken cover during my artillery barrage. These crags are indeed the ideal cover in barren lands, I should be mindful of them later on.

But resistance is futile and I bypass the obstacle to meet another column of brazilian tankettes. Meanwhile, my infantry is catching up, riding fast on the priceless Bren carriers. Stupid me! There was another italian squad hidden on the opposite slope of the valley. They were quiet so far because suppressed, but now they show up for a last hurrah. The tommies have to disembark for a surgical cleanup, while the Matildas teach english to their italian counterparts. In the bloody battle, I loose one of my squad, which is taking one achievement away, damn!

Finally, we are reaching the settlement and the fort, which looks dangerously quiet. No doubts there are some machine guns ready for an opportunity fire behind these dark windows.

Using Assault movement, I scout around the buildings, to spot some jerrys entrenched in the building on the outskirts. The tommies carry out a merciless assault and take ground. Good surprise, more reinforcement are coming, 3 more squads to support the final assault. Although they’ll take 3 turns to reach the settlement, in the absence of proper transport.(And now I realise I should have sent my empty Bren carrier to accelerate deployment). As there’s no signs of life, I decide to call for another artillery barrage, hopefully to suppress the last defenders.

My AFVs circle around, with a hope to take them aback, while infantry comes closer to the city wall, and capture another outpost.

We finally spot the last defenders and HQ officers trying to flee from the back of the fort. They are snared in a snap, and we claim victory on Turn 11!