Mac Grognards rejoice! Slitherine has finally just released one of his flagship title for the Apple platform: Battle Academy renamed for the occasion “BBC Battlefield Academy” to address and solve the lawsuit initiated by Electronic Arts in 2010. It’s a significant move from the top publisher of digital wargames to recognise the significance of the Mac Wargaming Community.

Originally launched in August 2010, the game was immediately proclaimed by both critics and players as one of the most innovative and enjoyable strategy games of the year for novices and grognards alike. This Mac version has a completely renewed and intuitive UI to make it more accessible for the different control systems available on Apple devices, but it keeps fully compatible with the PC version, making it possible not only to play with PC saved games, but also to play multi-player over the network.

Inspired by an original online game concept devised by the BBC, the game has more than 30 battles in a range of theatres of war from the North African desert through D-Day to the to the snowy Ardennes mountains where the Allies battled to repel the final German offensive. The game engine is also completely script-driven, allowing players to create their own missions and scenario in a simple and effective way. The server-based PBEM++ Slitherine system completes the package, for a gaming experience that will certainly please both hard core wargamers and newcomers.

“We are very proud to bring this franchise to Mac”, said Philip Veale, Technical Director of Slitherine. “There is an increased demand for our genre of games on the Mac  and we are sure BATTLE ACADEMY can easily challenge to become the most played strategy game on the Apple system. Players find it so easy to get into the game and start head-to-head battles, through our PBEM system.  We have taken the decision to make the game fully integrated with other platforms and we will continue to do this in future iterations as well!”. 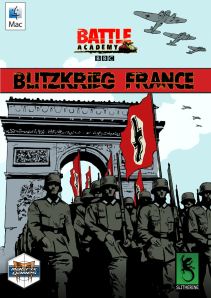